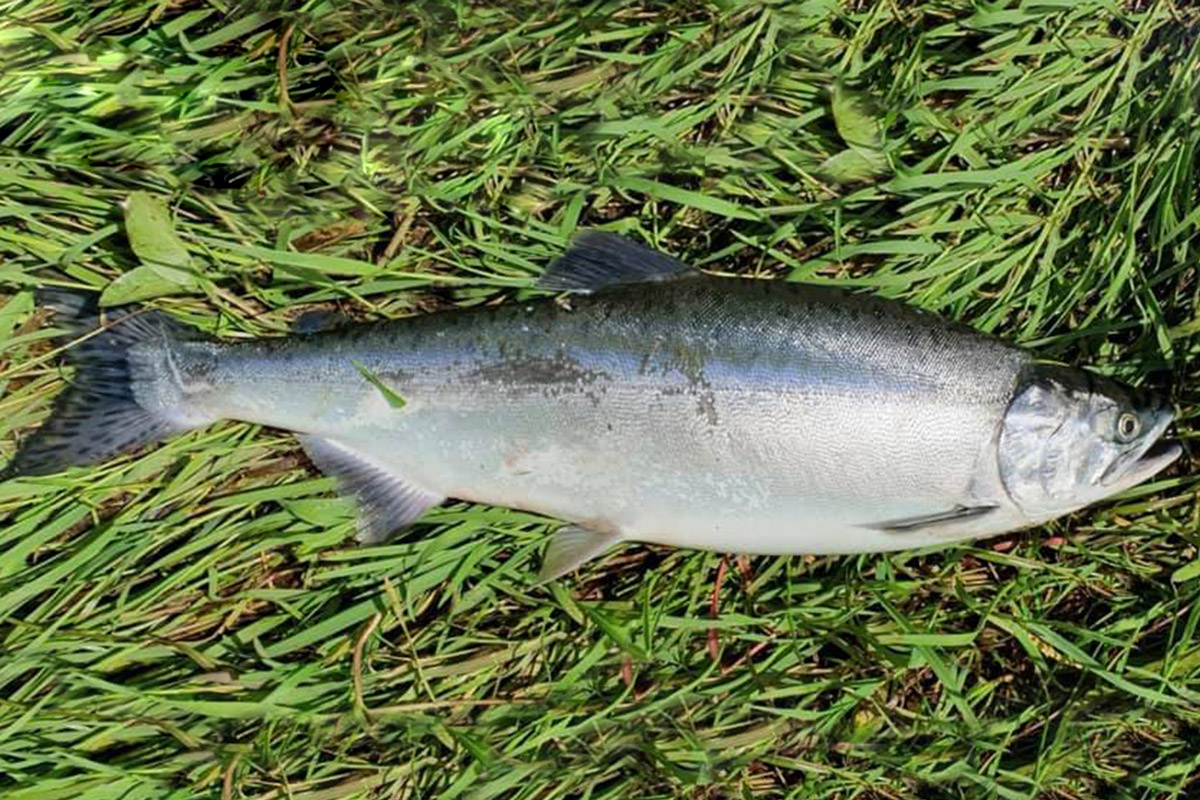 The first pink salmon (Oncorhynchus gorbuscha) of 2019 has been reported from Irish waters. The fish, weighing around 4lbs, was caught on prawn by an angler fishing Melley’s High Bank for Atlantic salmon at the famous Drowes Fishery, Co. Leitrim .

Pink salmon, also called humpbacks due to the pronounced high back males develop at spawning time, are a Pacific salmon species not native to European waters. They were first brought from their native range in North America to northern Russia for food production in the late 1950s, and were repeatedly introduced from the 1980s until the early 2000s. These fish have since spread from the rivers where they were stocked and are establishing breeding populations.

Pink salmon have a very a strict two-year life cycle; the offspring produced in any particular autumn will return to spawn two years later. One consequence of this is that there are two distinct types of pink salmon: odd-year and even-year spawners.

Although they were first recorded in Ireland in 1973, they were very rare in Irish waters until 2017 when unprecedented numbers were recorded from several major rivers. Large numbers were also reported across Scandinavia, Denmark, Iceland, France, the UK and even as far away as Newfoundland in 2017. The exact reasons for this are still unclear but many experts have long predicted a large ‘run’ of pinks across Europe in 2019. This Drowes fish may well be the first of many?

Although pink salmon all die after spawning (like all Pacific salmon species), there is much uncertainty surrounding the species and the exact impacts they will have on our own salmonid populations and the rivers in which they live. Unlike Atlantic salmon, pinks spawn much earlier in the year and at much higher water temperatures, typically June/July until early autumn, with eggs hatching after 3-5 months. The optimum water temperature for the species is said to be 8-10°C with incubation poor above 15°C. Once fry have hatched from sites in the lower reaches of larger rivers, they immediately migrate to estuaries where they aggregate for some weeks before heading to sea.

Adult pink salmon are easily identified thanks to characteristics not shared with Atlantic salmon. These include:

Growing pink salmon populations in Irish rivers have the potential to contribute to nutrient loads (through decaying carcasses) thus enriching watercourses as well possibly competing with native fish in both the river and marine phase of their life cycle. The head of Research and development as Inland Fisheries Ireland, Dr. Cathal Gallagher, said of this development that “The potential presence of pink salmon in Irish rivers again is of ongoing concern to Inland Fisheries Ireland, as its presence in large numbers may negatively impact some of Ireland’s native species”.

Writing in a previous Off the Scale magazine article on the topic in 2017 (read here ), Dr. Ken Whelan, Director of the Atlantic Salmon Trust admitted that, “Obviously the greatest concern we all have is the likely impact of pink salmon on our native salmon and trout populations. It is certainly far too early to know what these impacts might be but it is fair to speculate that these might include both positive and negative effects”.

Data on this new species is lacking in western Europe and anglers are requested by Inland Fisheries Ireland to retain any pink salmon for analysis, as well as recording the location and photographing the fish. This will help gather data on genetics, growth and diet and possibly help understand why the species is suddenly shifting its distribution.