One of the longest debates in the angling centres around what exactly fish are capable of seeing. Do they see colour? How far can they see in front of them? Do they see as we see? Can they see us? What follows is a basic breakdown of current knowledge on the incredibly complex subject of fish vision.

One of the longest debates in the angling and indeed the scientific world centres around what exactly fish are capable of seeing. Do they see colour? How far can they see in front of them? Do they see as we see? Can they see us? What follows is a basic breakdown of current knowledge on the incredibly complex subject of fish vision.

Fish as we know them have been around for some 450 million years. In that time many countless species have evolved and, as you might expect, Nature has tried many different approaches when it comes to sight underwater. Some have persisted, some haven’t. Some of the oldest species, such as deep sea hagfish have little more than light sensitive cells on their heads instead of eyes, able to only differentiate between light and dark. Many fish though have highly developed vision. In fact, perhaps surprisingly, fish have some of the best vision in the animal kingdom.

“Overall, a fish’s eye is better adapted to see movement and contrast rather than actual detail”

A fish’s eye is quite similar to that of a human or any other vertebrate but the components work in slightly different ways due to how light behaves underwater. There is a cornea (for protection), a lens (for forming an image), an iris (for adjusting light levels) and a retina (containing light sensitive cells). A fish’s cornea is very rounded which allows it to receive light information from a wide field of view, often up to 360°. A human’s field of view lies at about 180°. Their lenses are almost spherical which means, despite their excellent wide angle vision, objects are typically only focused in the centre, i.e. a fish must look directly at something for it to be in clear focus.  Some species, such as brown trout, are thought to be able to sharply focus on near and far objects at the same time, much like predatory birds. Overall, a fish’s eye is better adapted to see movement and contrast rather than actual detail. You could say that many fish are generally short sighted.

Humans and many other animals adjust focus by changing the shape of the lens. Fish normally change focus by moving the lens closer to or further away from the retina, almost like a camera.   The majority of fish are not able to adjust their iris, it is fixed in shape, so they are not able to control the amount of light entering the eye. Of course, most fish do not have eyelids either to help with this problem. Sharks and rays (known as ‘elasmobranchs’; a different evolutionary line of fish) do have moveable irises and are the exception. Predatory fish have eyes that are quicker to adapt to changing light levels than most species and this is probably why they feed most actively at dawn and dusk, in low light – they have a sight advantage over their prey. It takes most fish quite a long time to adjust their eyes to changing light levels (often 15-20 mins or more) which is the main reason why aquarium fish often hide for a short period hide when you turn the tank light on. 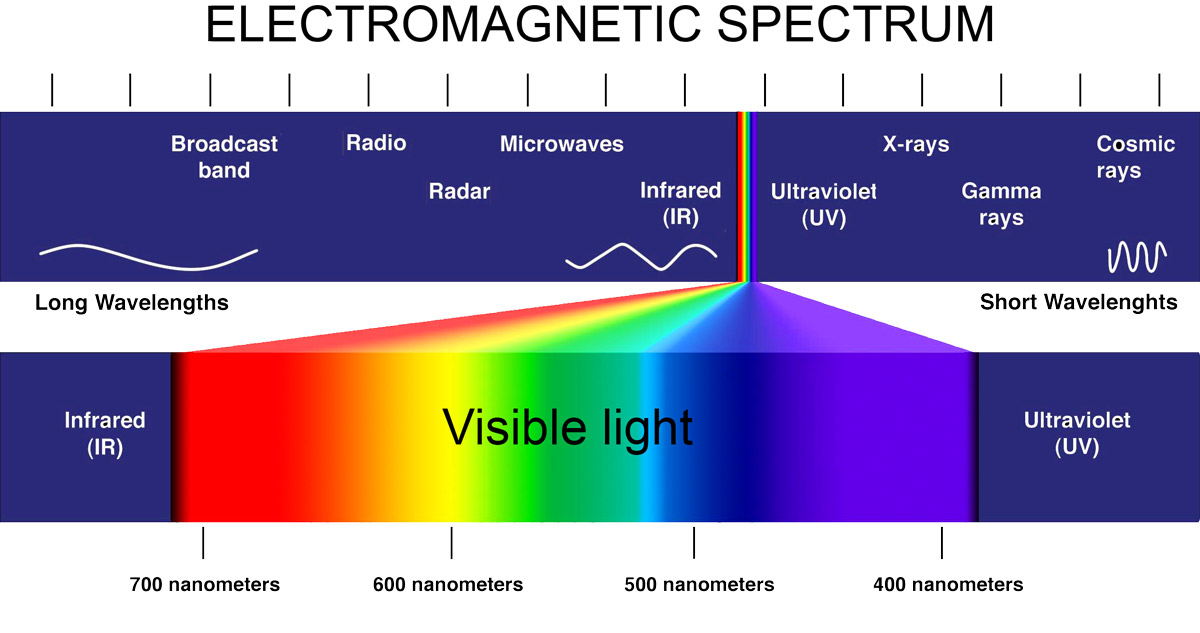 Light is a complex subject to understand in its own right, without adding how it behaves underwater as well! Light behaves like a wave, with wavelengths and frequencies. Human eyes are only able to detect certain wavelengths (the so-called visible spectrum) despite the fact that many other types of light exist in the electromagnetic spectrum (see diagram). We are not able to see in X-ray vision, for example, but it obviously exists!

Like most animal eyes, a fish’s retina contains two types of cell; rods for determining light and dark and cones for seeing colour. We humans have three cones in our eyes, detecting red, blue and green light. Fish also possess these cones meaning they are absolutely able to see colours, although this is not possible at night. Again the exception here is sharks and rays (few or no cones), which are mostly colour blind anyway. Colour vision is used by fish to help them see prey against a variety of backgrounds and also to detect potential mates and predators.

In addition to seeing colour, we now know that many animals, such as insects, birds and many fish, often possess a fourth type of cone capable of seeing in the ultraviolet (UV) spectrum, something that is invisible to our naked eye. This brings vision and the perception of colours into a whole new world! Research is still ongoing but many common species such as Rainbow trout, Brown trout (at least when young), carp, goldfish, pike and bass appear to be able to see in ultraviolet.

Some deep sea species have developed bioluminescence. This is where organs work with special bacteria to produce light, which allows fish to attract prey and find mates in total darkness 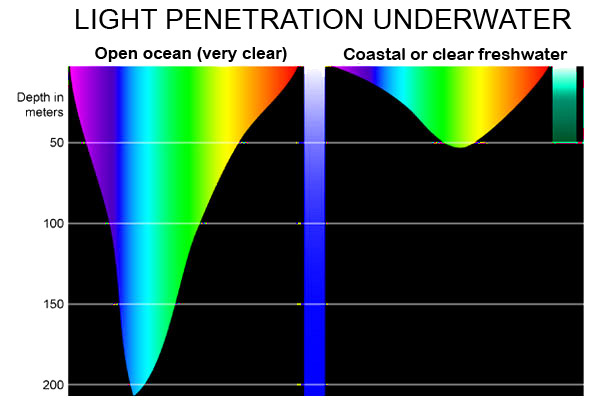 However, even though fish may have the capacity to see a lot in their underwater world doesn’t always mean they can! Water clarity (turbidity) hugely affects the amount of light penetrating underwater and it is determined by factors such as wind action, suspended particles, algae and angle of the sun. In a shallow, enriched pond, for example, water clarity may be so poor in the warmer months due to algae (appears green/brown) that hardly any light penetrates. Some species’ eyes are adapted for different environments. Fish living in predominantly shallow, clear water (where there is still much light and therefore colour penetrating) will typically have better all-round colour vision. Deeper sea fish like whiting and conger eels have large eyes containing more rods which allow them to detect more light in typically dark habitats. Other species have forgone much of their vision in favour of other senses such as Wels catfish (very small eyes). However, if there is no or very little light reaching into the water then a fish will see very little, regardless of how developed its eyes are! This is where other senses such as its lateral line and “smell” (really the detection of water soluble chemicals) come into play when detecting food and predators.

Amazingly, some fish species actually change the anatomy of their eyes before they migrate for spawning. Eels, for example, actually increase the diameter of their eyes before running from freshwater to the sea which equates to larger lenses, less cones (for colour) and more rods to enable to better see in deeper oceanic waters. Conversely, species like salmon possess an enzyme (called Cyp27c1) which is ‘switched on’ when they migrate from the ocean back to their spawning streams  . This enzyme changes vitamin A1 to vitamin A2, which has the ability to enhance vision of longer wavelength light (red and infrared), enabling the fish to see better and further in shallow freshwaters.

Even in clear water, most of the visible spectrum (the colours we can see) is absorbed within about 10m (33ft) of the surface (see diagram). The shorter wavelengths like red, orange and yellow disappear first and appear as shades of grey. The notion that red fishing line is “invisible” to fish as it is the first wavelength to disappear is largely incorrect. It is less visible, but not invisible. A fish’s eye will still be able to see it as a shade of grey under typical conditions. In murky water red light may very well disappear within just a foot or two of the surface. A yellow bait will still appear yellow at say 25ft but won’t be as bright a yellow as at 10ft.

“Even in clear water, most of the visible spectrum (the colours we can see) is absorbed within about 10m (33ft) of the surface”

The longer wavelengths of green and blue are able to penetrate further underwater before disappearing (being absorbed). Blue is the last to go which is why deep water in the ocean often appears blue when underwater. The deeper you go the less colour there is. Usually all visible light is gone by the time 100m (330ft) is reached. Some species have developed bioluminescence (“glow in the dark”) where their organs work with bacteria to produce their own light sources. 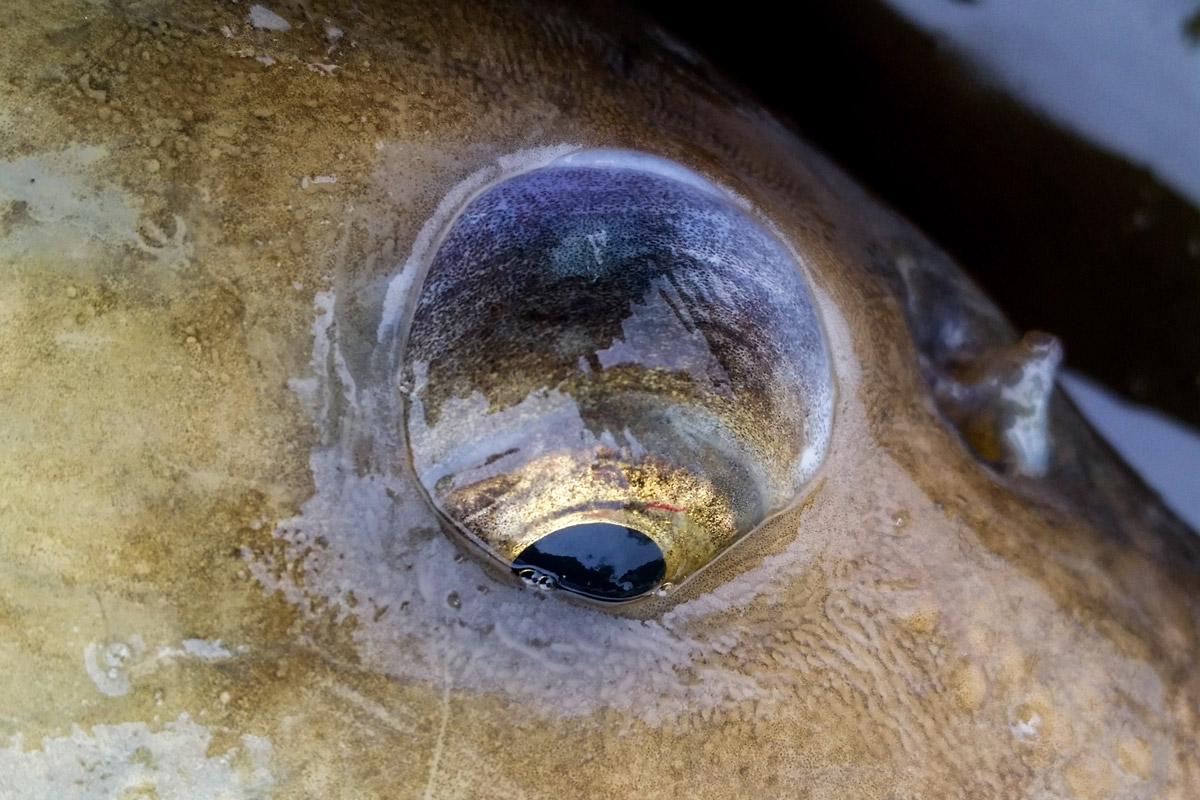 As most of you reading this will know, fish can definitely see what’s going on above the surface, including spotting you! Aside from how a fish’s eyes are constructed, all fish looking up towards the surface will see a round hole of light. This is known in physics as ‘Snells window’ and is to do with how light is refracted as it hits water – it’s complicated! This means that when looking up, fish can only see through a 97.2° window. The very same applies to us and is why underwater photos looking up towards a diver feature a round halo of light and appear distorted. The centre of this window is clear and in focus toa fish but becomes blurred towards the edges. A fish struggles to focus on objects directly above it though. Outside of this 97.2° field a fish cannot see anything above the water, only a reflection of the surface underneath.  The higher the fish is in the water the more clearly it is able to see, although it all depends on water clarity, ripples on the surface and light levels above the water’s surface. The laws of physics tell us that a fish cannot see much above a 10 to 20° angle on the horizon so if we can stay below that height then we are as good as invisible to the fish. Be quiet though as they may still sense your vibrations! 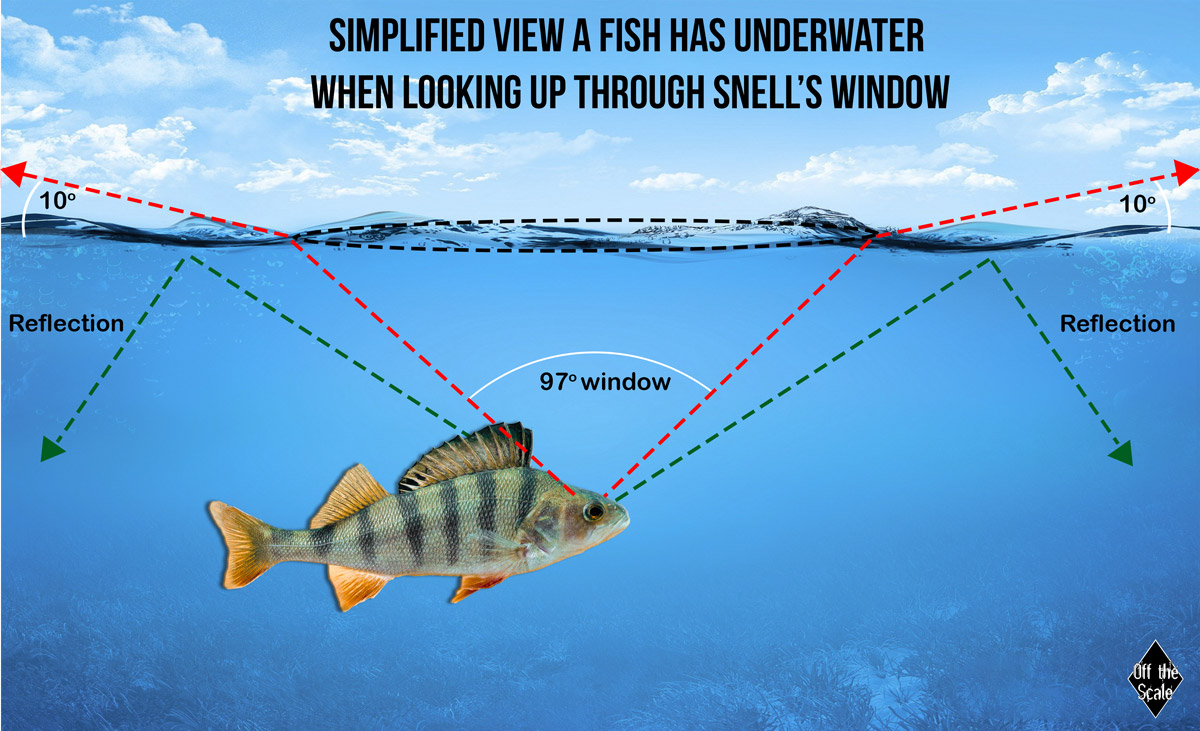 Like humans, fish eyesight quality is also highly dependent on diet. For example, a deficiency of vitamin B1 (thiamine) can lead to lower prey capture rates and reduced growth

So, to finish, what does all this mean for anglers, other than giving you a major headache…  An old sea trout fishing adage says ‘dark night, dark fly; light night, light fly’.  This makes some sense as a dark fly will create a stronger silhouette against a dark background, and vice versa. Lure fishermen in both sea and freshwater often follow the same logic on dull and bright days or times of the day. Given that many fish can see in UV, fluorescence of colours would seem to play a large role in fish detecting anglers baits, which adds yet another complicated dimension to it all! Now it suddenly becomes much more difficult to choose a bait that is the “right colour” – because, after all, what is colour? What a fish sees and what we see are clearly very different, and different fish see colours slightly differently. This may even vary between individual fish, or fish of different ages which ties in well with a lot of anecdotes from fly and especially carp anglers who find certain colours more effective for certain age classes of fish. We may never truly understand what exactly a fish sees through its eyes but if nothing else it gives us anglers something else to ponder over when we are not catching!