Things have certainly developed since the days of the first few castable echo sounders back in the early-2000s, like the Humminbird SmartCast. These were a revelation in many ways, proof of concept if you like, but fell short in several key areas and were soon dismissed and forgotten by most. Largely, this was due to technological limitations at the time, in the days before wireless technology was in any way reliable. No matter what fishing you do or where you do it, you surely can’t have failed to see or hear about Deeper’s range of products in the last few years. In fact, since reviving and evolving the technology in 2013, the word ‘Deeper’ has become a universal synonym for castable SONAR (SOund NAvigation and Ranging). But is this offering from the Lithuanian-based company really something useful to add to your armoury or is it just another clever marketing ploy? We tried and rigorously tested the Deeper Pro+ over a number of weeks to find out… 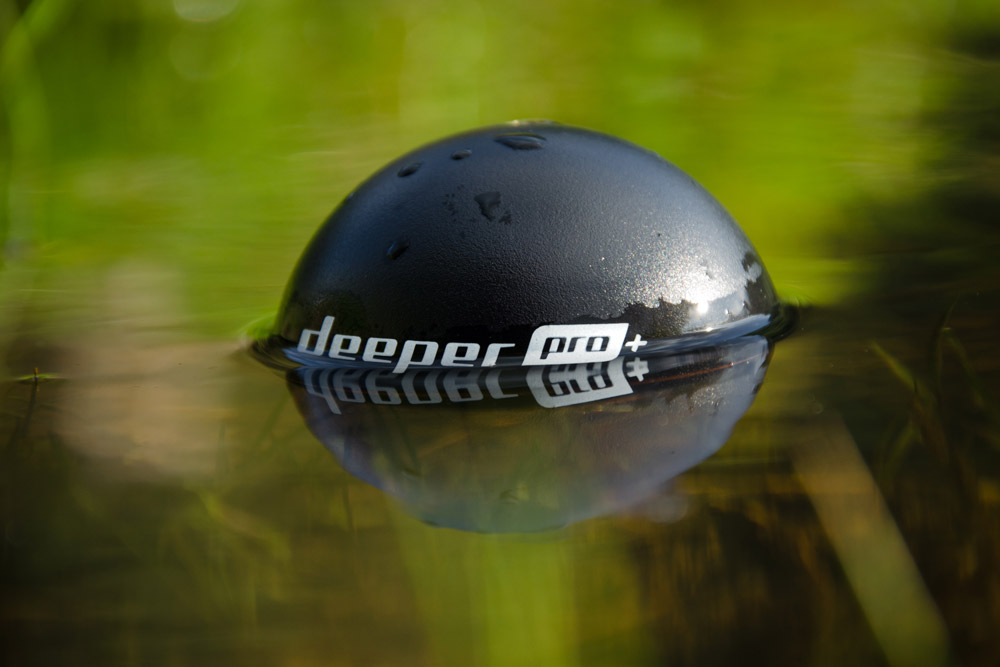 The specs Weighing in at a touch over 100g (3oz), the Deeper Pro+ is an aesthetically pleasing castable SONAR. Being almost perfectly spherical in shape, the 6.5cm diameter unit casts surprisingly well and we were able to whack it out accurately to almost 100m, which is the range limit of the unit. Out of the box, the Pro+ comes with a complimentary protective neoprene pouch which is a nice touch from Deeper. Having downloaded the free Deeper app and synced it to your Android or iOS device (very quick and easy), the Pro+ works via a wireless Wi-Fi connection, meaning you don’t need an internet or phone signal. This also results in significantly faster data transfer speeds than Bluetooth, for example, meaning your Deeper is able to send depth, water temperature and fish information back to your device in real-time. The Pro+ works from depths of 0.5m (2ft) to 80m (260ft) which will obviously cover you for almost all situations. Featuring a rechargeable (USB-B) 850mAh lithium polymer battery, the actual SONAR technology crammed into this small package is quite astounding. Like many of its bigger boat-based cousins, the Pro+ features dual SONAR beam frequencies of 290kHz (15° angle ‘cone’) and 90kHz (55°), referring to the number of SONAR pulses sent out by the onboard transducer (290,000 and 90,000 per second, respectively). Higher frequencies and narrower beams generally allow you to see more detail and vice versa. You can toggle which beam displays on the continuous scrolling screen via the Deeper app. The app also gives you access to a host of options including a calendar, your devices camera and a very useful note taking facility to record information before you forget it! 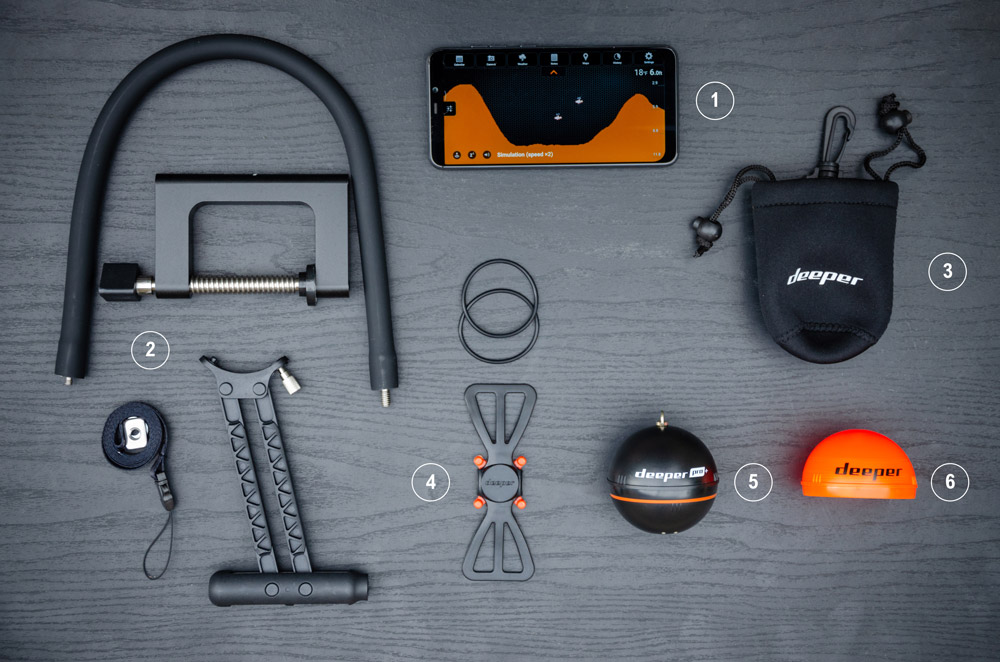 Mapping functionality However, the real discerning feature of the Deeper Pro+ (and what makes it the ‘plus’ version) is its ability to plot depth (bathymetry) and bottom contour maps in real-time. This is a feature usually reserved for high-end boat SONAR units. By selecting ‘Onshore GPS’ mode in the app, the Pro+ pinpoints your location via its internal GPS and records depth values as you cast the Deeper around. (‘Boat’ mode also does much the same thing but instead uses your devices own GPS). This produces a live and accurate on-screen, colour-coded plot of the area you are casting into, allowing you to literally map out swims or even entire waters in a surprisingly short space of time. The coverage of each cast in mapping mode will depend on the chosen SONAR frequency and depth of the water. The map is automatically saved (and uploaded to Deeper’s cloud service called Lakebook, if you wish) and can be reviewed again at any time under the ‘History’ tab. Tapping anywhere on the map will show the depth for that point and you can also re-run the screen readout from when you mapped to recall where features and fish were. Cleverly, you can even log the same area on different visits and the app will consolidate and update all the information onto the same map.

The verdict and some recommendations In testing, mapping an area with the Pro+ was very straightforward. Connect to your device, cast out the SONAR when in ‘Onshore GPS’ mode, wait for the green satellite icon and then reel it back towards you – simple as that! We did have some connectivity issues in windy conditions, however, which is sometimes unavoidable. If the internal Wi-Fi antenna is not able to get a clean line of sight back to your mobile device then the signal will drop and it may take a recast to reconnect again. The choppier the water (and higher the waves) the more of an issue this is. There are three attachment points on each unit so you can alter the angle of retrieve slightly, the bottom one being the best for casting from the bank. Of course, always make sure to reel the Pro+ back towards you at a slow pace or else the Wi-Fi antenna may become ‘submerged’ and lose connection with your device. A bit of practice and you’ll soon get a feel for it.

Another point worth mentioning regarding connectivity is that signal strength will be significantly improved if your smartphone or tablet is supported off the ground, where many users seem to place theirs. As an optional extra (or part of certain combo packs), Deeper supply a rubber smartphone mount, which allows you to attach your device to your rod, thus improving signal strength. In all honesty, although we couldn’t deliberately get our device to come free of this mount during casting (no matter how hard we jolted, whipped or cast!), there is an undeniable feeling of insecurity when casting your Pro+ out with a several-hundred-euro smartphone attached to your rod! Instead, for reliable use and peace of mind, we suggest you pick up a tripod or bankstick mount for your smartphone. These are very cheap online and also double up as a handy addition to your angling photography kit.

A fairly stout rod is best for using the Pro+, such as a carp, pike or heavy spinning model, but you can get away with much lighter rods and line, with care. However, to reduce the risk of line breakages on the cast, heavier gear is more sensible. Floating braided mainline is also good idea as this would help to keep the Pro+ in the optimum retrieve position for Wi-Fi connectivity. When out fishing, there’s a good chance that many of you will want to check the depth or bottom makeup of an actual spot before using the Pro+ as a target to cast at. The black colour of the unit sometimes means you will struggle to locate it once its out on the water’s surface but thankfully Deeper offer an additional fluoro orange cap which really does alleviate this problem. Battery life on the Pro+ was more than acceptable for regular use but if you do plan on getting away for a few days or going on a full-on mapping mission then you might consider bringing a portable power bank with you. Alternatively, you can charge the Pro+ via your vehicle’s cigarette socket. Remember, your mobile device receiving the SONAR data will also need to be adequately charged as well, irrespective of the Pro+. Many anglers mistakenly call all SONAR units ‘fish finders’ which, technically, is incorrect. Although you can absolutely locate single large fish or shoals of fish using the Pro+, there are limitations to the technology. Sometimes weed and other bottom debris may show up as fish. As a result, we would advise thinking of the Pro+ as more a tool to help discern depths and bottom contours rather than something to reliably locate fish with. Large weedbeds and snags were picked up with good reliability in testing but, again, you may find some errors. Incidentally, Deeper’s latest SONAR model, the CHIRP+, has much improved resolution for locating fish and structure. Read our full, comparative review of the CHIRP+ here 

Conclusion Any of you who have done any amount of boat fishing will appreciate how invaluable a SONAR unit is. In fact, many wouldn’t even bother to go afloat without this vital aid as fishing becomes very much a ‘chuck it and chance it’ affair. Surprisingly, some bank/shore anglers seem to think using any form of SONAR is cheating, which, of course, it simply isn’t! The Pro+ consistently proved its worth in being able to very quickly and accurately reveal the depths and features of the water in front – far more quickly and far more accurately that you could achieve with a traditional marker float or lead set up. Using the Pro+ is a huge shortcut, not necessarily to success but in building up a better, more detailed picture of your venue. It comes fully recommended.

In Ireland the Deeper range of products are distributed through Anglers World, Navan, Co. Meath. They can be found at www.anglersworld.ie   . The Deeper Pro+ is available for around €250 RRP Deeper have a very helpful support site for any queries you are likely to have, here 