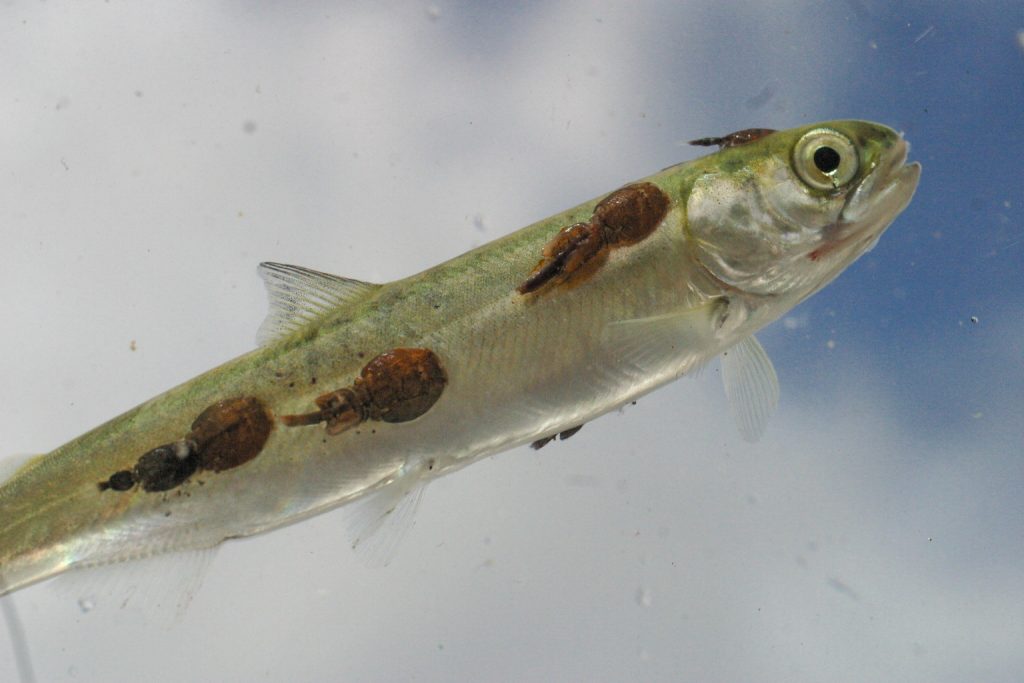 Anglers have long suspected that fish of various species jump to help remove parasites – it is a logical assumption but has rarely been tested experimentally by scientists. However, a new study on Pacific salmon from the Simon Fraser University in British Columbia, Canada has strongly suggested that juvenile sockeye salmon (Oncorhynchus nerka) jump out of the water to dislodge sea lice.

Wild juvenile sockeye were captured for the study and Caligus clemensi (sea louse) and Lepeophtheirus salmonis (salmon louse), both common parasites of wild and farmed salmon species the world over, were used to see how effective jumping behaviour is in removing them.

In controlled experiments the researchers found that, on average, the salmon that were allowed to leap in the uncovered tank had 22% fewer sea lice compared to those that weren’t allowed to leap in the covered tank after a 3-day period. Juvenile salmon that were prevented from jumping had as many as 10 lice on them, which is a substantial burden for a juvenile fish. Whilst previous research has shown salmon (both Pacific and Atlantic species) infected with sea lice jump out of the water more often than those without, this is the first time scientists have determined that jumping behaviour is indeed an effective way of dislodging the parasites.

The impacts of lice infestation is particularly harsh on juvenile fish and is known to impact growth, behaviour, feeding, migration and all-too-often, their very survival through reduced immune responses and increased predation risks. Lice infestations originating from salmon farms are a major concern for wild stocks in many parts of the world, including Ireland.

However, the real take-away message from this recent study is that the energetic costs associated with the leaping behaviour of juvenile (in this case sockeye) salmon may be substantial. A calculated dislodgement success rate of less than 2% would imply considerable energy expenditure for a fish and it was calculated that a juvenile salmon may have to leap up to 50 times to remove a single louse. Such high energy expenditure may go some way to explaining the decreased survival of wild salmonid stocks in the vicinity of marine salmon farms.  Lead author Emma Atkinson stated that “At that early life stage, that’s a lot of energy to be putting into dislodging lice”.

Although further study is needed the results of this study adds yet more weight to the argument that marine salmon farms, where fish lice populations are unnaturally high, are very damaging to wild salmonid stocks, including Atlantic salmon and sea trout.