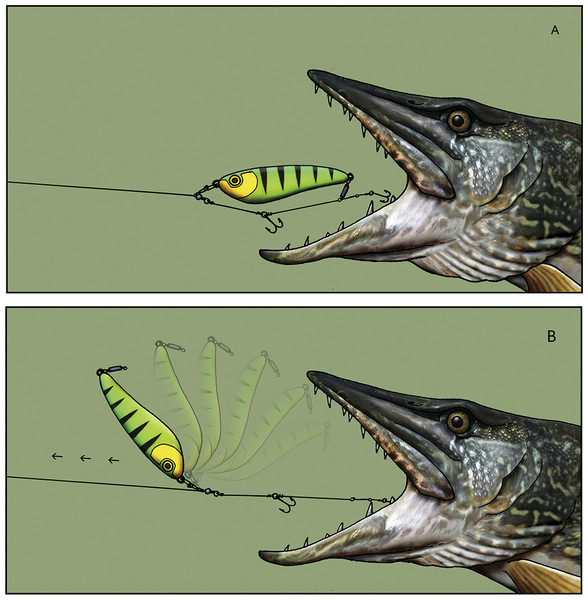 A new scientific study has recently proved how using a novel lure fishing set up for pike not only increases the ratio of hits to landed fish but also significantly reduces handling and unhooking time. The study was conducted by anglers Jens Jakob Bursell and Prof. Robert Arlinghaus fishing the Baltic Sea off Denmark and Germany over the 2013-2017 period.

Using over 760 pike contacts (strikes) at the lures in the study, landing rates increased from 45% of hits with normal lures (hooks fixed to bait) to an impressive 85% when the same lures were fished with the new release-mechanism. In other words, far less pike were lost when fishing with the release rig. Hooking time and extent of bleeding was significantly reduced when fishing with hardbaits (jerkbaits) fished “release rig” style.

Whilst many pike and predator anglers have begun to use similar rigging methods in recent years (e.g. the series of Line-thru lures from Savage Gear), this is the first time a study with empirical data has proven it to be more effective and better for the fish and therefore this makes the study a landmark in catch & release pike angling conservation and management circles.

The rigging technique has been dubbed the “release rig” as the trace (supporting the usual pair of treble hooks) is semi-fixed to the lure on the cast and retrieve but separates when a fish strikes and shakes its head. The lure then slides away from the fish up the trace, shifting the centre of gravity of the set up away from the hook hold, meaning the hooks are far more likely to stay in position in the fish’s mouth.

Another theory proved during the study was that the release rig allows the use of much smaller hooks (4 to 5 sizes less) than traditional lure set ups. Large hooks need more power to penetrate and hence may reduce landing rates. Shorter hook points (measured as distance from point to backside of barb) of small hooks means they can more easily achieve a hook hold with the barb sinking into the thin soft layer of tissue on top of the hard bony jaws in the mouth of the pike compared to large hooks. Smaller hooks are also sharper for their size and, of course, are prone to cause less damage than larger ones.

Incidentally, this was an independent scientific study and was not sponsored by a fishing tackle company so it seems there really is something in this! The paper (Bursell & Arlinghaus et al., 2018) is well worth a read for any predator fans out there and is available here: https://peerj.com/articles/4744/