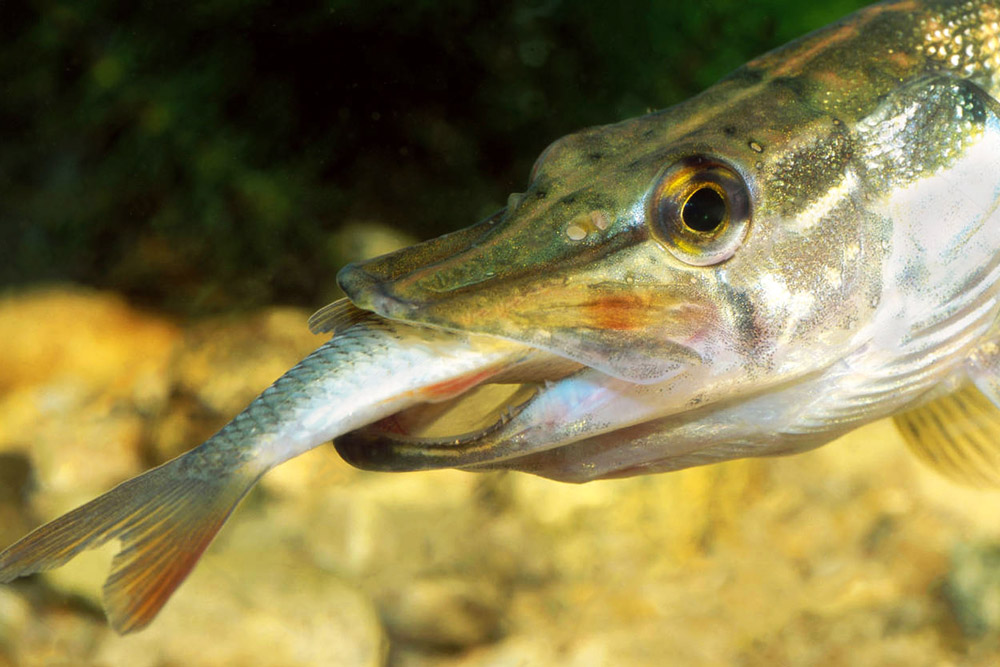 New research released recently by Inland Fisheries Ireland (IFI) suggests that pike in Irish lakes have changed their dietary habits compared to historical norms. The finding is based on new report entitled ‘Pike (Esox Lucius) in Ireland. Developing knowledge and tools to support policy and management’ which investigated the diet of pike in Lough Conn, Co. Mayo and Lough Derravaragh, Co. Westmeath during 2016 and 2017.

Previous dietary research carried out by the Inland Fisheries Trust (now IFI) in the 1960s and 70s on Loughs Derravaragh and Sheelin indicated that pike preferred to eat wild brown trout (Salmo trutta) and perch (Perca fluviatilis), although many have questioned the validity of these findings since that time, especially considering this era was prior to the widespread colonisation of roach (Rutilus rutilus) across the country. Nevertheless, this latest research reveals that pike appear to now predominantly eat roach. Researchers in Scotland and England have also found similar changes in pike diet occurring in Loch Lomond (Scotland) and Lake Windermere (England). It is thought the changes in diet are due to the invasion of roach in these waters.

The IFI study sampled over 1400 pike from Lough’s Conn and Derravaragh, monthly from August 2016 to July 2017. Standardised electrofishing (using an electrical current to temporarily stun fish) was the main method used to capture pike, which were then anesthetised prior to handling and release. Stomach contents were examined through gastric lavage (i.e. stomach flushing), a non-lethal technique of examining recent prey items. Additionally, some 110 fish from pike management (culling) operations on Lough Conn, a designated wild brown trout water, were also used in the study.

Roach were overwhelmingly the most important prey item in the pike samples from Derravaragh (38% of all stomachs), with three-spined stickleback the most numerous in the Lough Conn samples (33% of stomachs). Roach were found in 32% of pike stomachs flushed from Lough Conn, whereas the 110 pike from predator control programme were found to contain roach in 67% of cases. Perch, macro-invertebrates and amphibians also formed a significant proportion of their diet in both lakes. Over the study period, brown trout were only recorded in 4% (Conn) and 1.4% (Derravaragh) of the 1481 samples. In fact, practically as many pike were found in pike stomachs in the Conn samples, whilst in Derravaragh pike actually ate more pike than they did trout, during the study period. These findings fully support those made by Debbi Pedreschi et al. (2015) in a previous pike dietary study funded by Inland Fisheries Ireland. 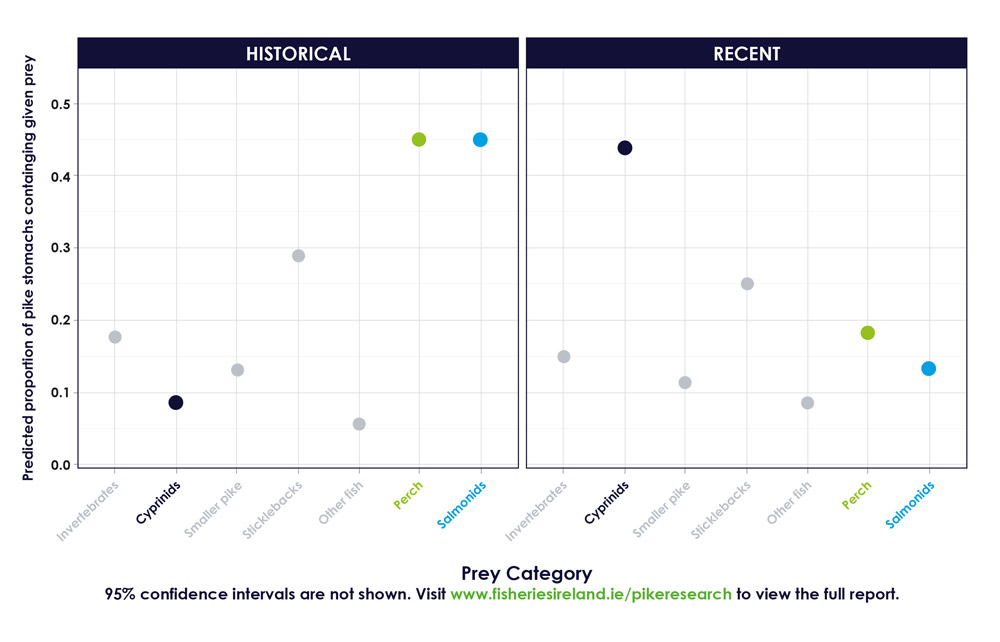 Without getting caught up in statistics, the major take-home point from this new research is that pike are evidently opportunists, preying on whatever happens to be most available at the time, which is at odds with historical Irish research which suggested pike preferentially preyed on brown trout. Whilst pike do indeed consume trout, particularly at certain periods, there is no detectable preference over a given year.

The research also examined whether pike and brown trout can co-exist in the same habitat. Using complex statistical models, it was found that both species could live together within relatively large, deep lakes with strong stream connectivity (plenty of trout spawning sites). However, in small, low-complex systems pike introductions could potentially have a devastating impact on resident brown trout populations, particularly if no other fish prey exist.

Furthermore, the report developed statistical models of historical data from Lough Sheelin to investigate the impact of roach invasions on interactions between pike removal and subsequent trout abundance. The results indicate that during periods of moderate or high roach abundance, the predicted number of trout in the lake changed very little with increasing levels of pike removal. This result suggests that pike removal (culling) may not provide much benefit to wild brown trout stocks in lakes where alternative prey fish such as roach are abundant.

The crucial conclusion from this research for many Irish anglers, both game and coarse, was that a reduction in trout fishing pressure from a medium to a low level was observed to have a more beneficial effect on the exploitable trout biomass than the introduction of a low level of pike removal.

CEO of Inland Fisheries Ireland, Dr. Ciaran Byrne, said: “This research was initiated to answer some ongoing questions relating to the dietary preference of pike and the pike-brown trout interactions in lakes across Ireland. Previous studies in this area were carried out more than 50 years ago which is a long time within our changing lake systems.”

Acknowledging the importance of this research, he explained that “it gives an insight into the behaviour of the pike species and provides updated information around their relationship with brown trout. The changing food web and altered preferences of predators in the water systems highlights the need for continued monitoring and updated data to inform effective management strategies.”

In a statement, IFI clarified that “The Policy Review Group will provide recommendations to Inland Fisheries Ireland which will be considered and, if appropriate, implemented. It is anticipated that any required policy is likely to be in place before the commencement of the 2019 season.”