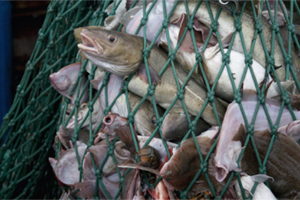 Ireland worst in EU for overfishing

Ireland has again topped the league table of worst offenders for the promotion of overfishing in the North East Atlantic, according to a new report, and is undermining international efforts to restore fish stocks to sustainable levels, according to a report by the London-based New Economics Foundation (NEF).

Ireland’s decision in late 2017 “to once again push for fishing quotas which ignore scientific advice is undermining efforts to end overfishing by 2020 ” under the Common Fisheries Policy (CFP), concluded the report’s author, senior NEF researcher Griffin Carpenter. For 2017, Total Allowable Catches (TAC) in the North Atlantic Ireland exceeded TACs by 17.8% (or 31,127 tonnes). Incidentally the next worst offenders were the UK, exceeding TACs at 15% followed by Belgium at 8.2%.

NEF conducts research on sustainable economics and has been analysing the outcomes of closed-door negotiations to set quotas by fishing ministers of EU member states. It evaluates total allowable catches (TAC) against the latest scientific advice.

Despite ongoing conservation efforts which are supported by Ireland, nearly half of assessed fish stocks in the North Sea are over-exploited, while seven out of every 10 quotas set across EU waters between 2001 and 2017 were above scientific advice, previous NEF analysis found.

Ireland’s continued push for over-fishing and financial greed is short-sighted in the extreme and will only cause further widespread ecological damage to all marine life, as well as long-term economic damage to the fishing sector.