In early April 2017 a scientific paper was published about the habits of bass. It had the lofty title, “Localised residency and inter-annual fidelity to coastal foraging areas may place sea bass at risk to local depletion”. So, what’s it all about? Does a scientific paper have the ability to effect angling, angling policy and angling regulations? This one does.

The basic facts about bass, as we understand, are thus; they spend the summer and autumn at inshore feeding areas. For winter and most of spring, bass leave the inshore areas and head offshore, where it is thought they gather in large shoals and then breed. When scientists realised that bass numbers were plummeting one of the first protection measures brought in was to protect the gatherings of offshore bass (when you think about it, it’s madness to be targeting spawning fish in any case).

In its conception, this was a simple study. It is easy to have a simple study about bass because we really know so little about them. The scientists of the Marine and Renewable Energy (MaREI) Centre at Spike Island have been experimenting with acoustic tracking for a few years now. Over a conversation about Cork Harbour it was decided that to acoustically track bass would be a worthwhile experiment. This enigmatic fish is currently our only protected marine species in Irish waters and is a very important species in a European context.

Lead scientist Tom Doyle (of University College Cork) secured funding for the research and plans were put in place to begin the study. Simply put, each year over two years fifteen bass were caught, surgically implanted with a transmitter and released back to where they were caught. An array of receivers were set up at strategically chosen locations around the harbour. These would listen to the “pings” from the tagged bass. That first year the scientists downloaded information during the summer and autumn and were able to track the tagged fish on different receivers. As autumn turned to winter the bass vacated the harbour and were tracked on the receivers near the harbour mouth as they left for their winter grounds.

“Older studies showed some bass being caught within 16km of their capture location so we anticipated at least some fish returning. Nothing prepared us for what we would discover; ALL our bass came back!”

The following year there was some degree of anticipation as we waited to see if any of our bass would arrive back to the harbour. Older studies showed some bass being caught within 16km of their capture location so we anticipated at least some fish returning. Nothing prepared us for what we would discover; ALL our bass came back! They not only came back but they came back to the exact same stretch of water that they had occupied before. The level of fine-scale residency was staggering.

We continued that second year and tagged a new crop of bass. That summer we had two sets of fish to monitor until the batteries began to run out after around a year and a bit. Our new set of fish were monitored in a similar way to the first and they duly left the harbour around mid-October/November. We waited for the New Year and sure enough the bass returned and again these fish returned to their local patch of water. It was safe to say that bass were incredibly loyal to their local area. Data returns showed that the fish did not stray too far from their local receiver. Tracking did show the odd fish taking a trip to various locations around the harbour for a couple of days but they always returned to the home receiver. 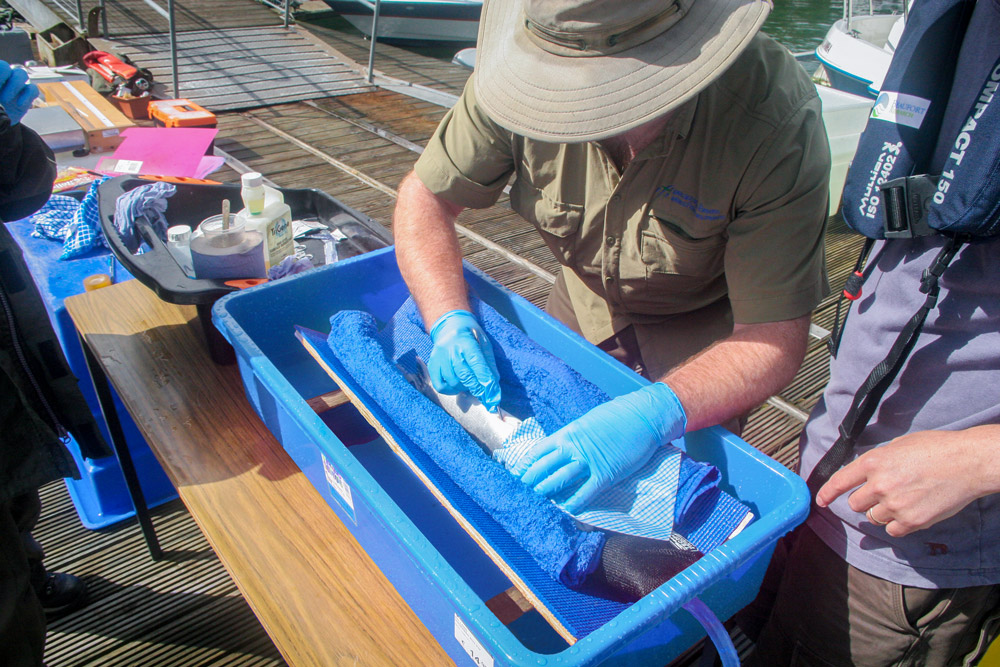 So, what do these results say about our bass and how we should protect them?

In terms of commercial fishing for bass (commercial fishing for bass is prohibited in Irish and most EU waters) it is important to recognise that local bass “hot spots” need to be protected. If you take all the fish from a particular area it is unknown how long it would take to replace those bass, if, in fact, they get replaced at all. It is unknown how a bass gets attached to a particular area of water. One thing is for sure though, they are fairly accomplished navigators to return to the same patch year after year.

The situation is equally important from an angling point of view. If you kill all the fish you catch from your local spot you may suddenly experience a drop off in bass numbers, as the bass are not replaced with “new” fish. It is ever more important to be selective when you are giving out information so that you try limit the amount of fish being retained by anglers.

We enthuse and rave about the ability of a salmon to find its way back to its river of birth to spawn. It may only do this once or twice in its lifetime. Bass return to their favourite reef year after year.

A stunning result of this study is the survivability of the tagged fish. Often we were told that mortality post-release could be as high as 20%. The study showed 100% survival after 30 days of each set of fish. It is important to stress that the fish were well handled and they were mainly caught with single hooks and all on lures, but the figures are still incredible – all the fish survived. It shows that catch and release is the perfect way to allow fishing to continue and fish stocks to be maintained or improved.

It should, it can and it does! In 2015 there was talk of a six month closed season for anglers – no bass fishing allowed. The results of this study in no small way helped decision makers allow catch and release for recreational anglers during the December to June restrictions.

It is clear that, where there is a commercial fishery for bass, selective methods such as towed line and rod & line fishing are the way forward. Blunt instruments such as gill nets should not be favoured over methods that allow undersized fish to be released back to the water alive – as we now know, it is clear that they will survive.

Recently the Isle of Man brought in new protection measures for bass. Again the policy makers were aware of the results of this study and as such the results offered comfort and encouragement that they were doing the correct thing in regards to their regulations.

In terms of protection of fish, this study is important as it allows fishery protection to be targeted more effectively. The bass are moving during specific periods and take specific routes when entering and exiting the harbour. Therefore, these routes can be protected. It is clear that there is little point in patrolling Cork Harbour in the period from Christmas until March, as the bass are simply not there. Fishery protection resources can now be utilised and targeted more effectively.

Bass are an important species. They are a target for a multitude of tourist anglers. They are also a target for a huge cohort of local anglers. The social and economic benefits of bass angling  as a sport fish far outweigh the value of those fish in any fish market. Bass fishing provides employment to many across the range of accommodation, restaurateurs, angling guides and tackle sellers.

“The study showed 100% survival after 30 days but the figures are still incredible – ALL the fish survived. It shows that catch and release is the perfect way to allow fishing to continue and fish stocks to be maintained or improved” 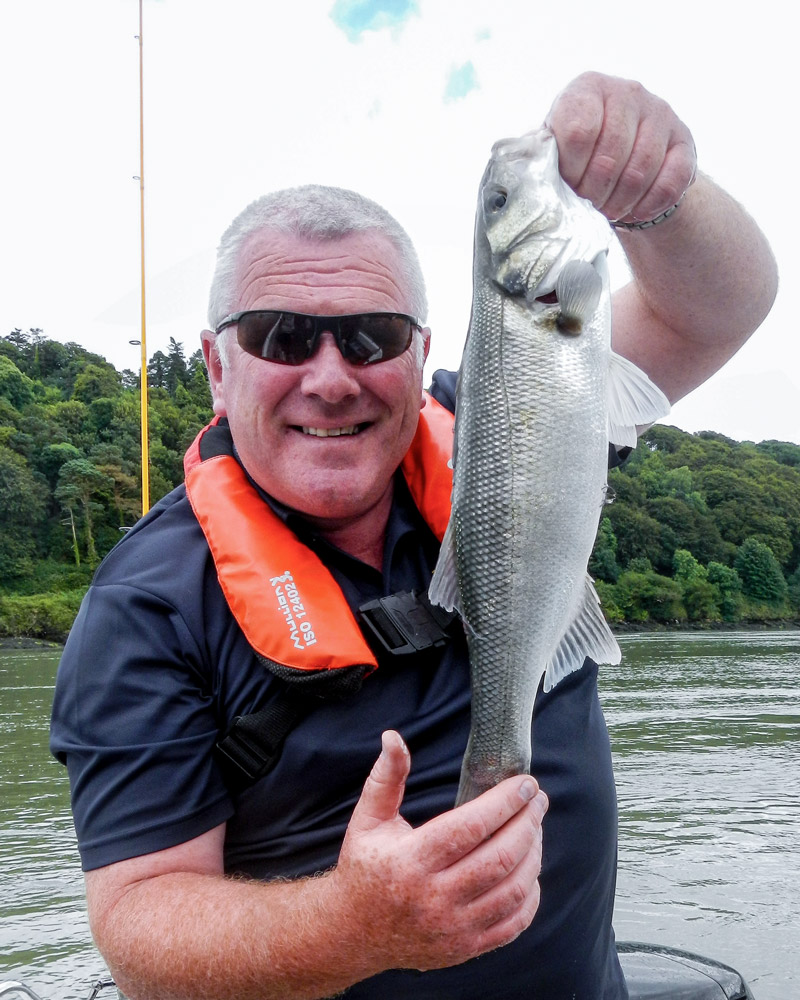 So how do bass get attached to an area? It could be genetic – maybe they follow more experienced fish when they are juveniles. Where do bass go when they leave the inshore areas and head offshore? How does a bass navigate? What would happen if you take a bass from its local area and move it to another area? Will it find its way back? Could bass from one area be used to restock areas where bass are scarce, or would they just up sticks and return to their home patch?

Studies like this one kick-start scientists into action. Scientists tend to get motivated when they see others making progress. In the UK and France, CEFAS and INFERMER have started a study where they are tracking bass movements at sea. It will be interesting to see what new information they will be able to add to our knowledge of this great species. In Ireland, Inland Fisheries Ireland (IFI) have a superb bass tagging programme  . Anglers are tagging fish with streamer/floy tags and also take scales samples from which scientists are building a large database on bass growth rates throughout different years. This is all work that is feeding into an ever-growing pool of quality information about bass and bass habits.

If our political servants have the sense to continue with bass protection measures, and if these measures are rolled out across the EU, the future should be bright for bass and bass angling. In the meantime, fisheries scientists, once they get support, will strive to increase our knowledge about bass and other important species. All that anglers must do is to limit their retention of bass and to practice and promote catch and release angling for bass.

For those interested in reading the paper, you’ll find the science bit here: www.nature.com/articles/srep45841.pdf 

This study had an interesting dimension in that it was a collaboration between scientists and anglers. The study was conceived by Tom Doyle and Jim Clohessy. Damien Haberlin, Mark Jessep and Ashley Bennison worked on different aspects and authored the paper with Tom and Jim. The anglers were a great bunch of locals – Richie Ryan, Andrew Davies, Kevin McLoughlin, Daire Lynch, Pat O’Shea, Kevin Murphy & IFI’s Michael Hennessy. Funding was provided by the Electricity Supply Board (ESB), Science Foundation Ireland (SFI) and the MaREI Centre.